After a long break the Formula-1 returned to Portugal and organized its race in Portimao for the first time. However, this weekend was not of historical significance only because of this: The pole position conquering Lewis Hamilton was going for his 92nd victory, for the purpose of overtaking Michael Schumacher for good.

The British racer had a good start, Max Verstappen overtook Valterri Bottas and it seemed that Hamilton would dominate the race from its early minutes. In the following curve Verstappen and Sergio Perez encountered, the Mexican driver drifted, whereas Bottas seized the opportunity and climbed up on the list. Moreover, the Finnish driver managed to overtake Hamilton in a spectacular manner, thereby taking the lead. Hardly was the show over, when the next element of interest occurred: It started raining. The McLarens ran smoothly with their soft and warm tires and Carlos Sainz suddenly managed to land on the first position whereas. Lando Norris landed fourth pretty soon. In the meantime, Verstappen’s car was involved in a small accident. The Dutch racer suffered no injuries and  started recovering the lost positions thereby managing to land third. 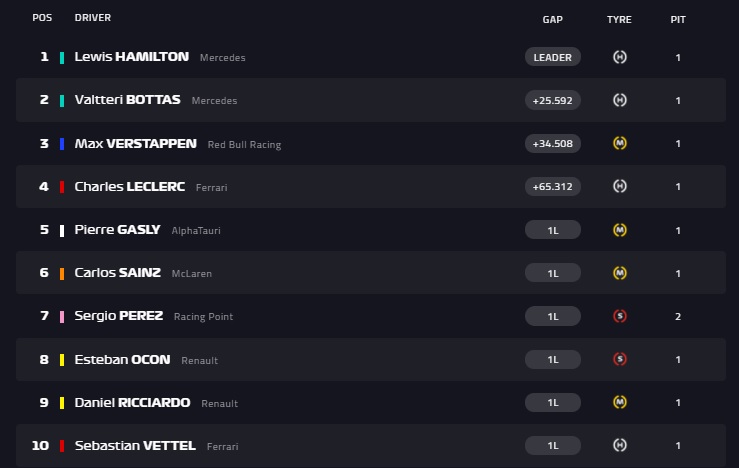 The Mercedes racers started their offensive and the reign of Sainz soon was history; however something even more interesting happened: Charles Leclerc was driving like there was no tomorrow and from position six landed fourth. Simultaneously, Hamilton drove his DRS calmly and left Bottas behind, thereby taking the lead of the Portugal Grand Prix. Following the mandatory box stops the situation hardly changed, the only subject of interest being the resurrection of Perez: The Racing Point Racer landed smoothly on the seventh position. The outstanding racer Sainz landed sixth, whereas the surprise of the day was Leclerc landing on the fourth and Pierre Gasly on the fifth.

Lewis Hamilton got his 92nd victory and now he is the absolute king of success – being followed by Bottas and Verstappen closing the Portugal Grand Prix.