Every racer has some qualities that fans adore or hate. In this series, we try to collect the five things we like and/or dislike about our current subject in a funny but realistic way.

Sebastian Vettel is a very special person and a quite special racer. People often say he’s the other extreme and it is partly due to this that he has a huge fan base.  Here’s what his sympathizers love him for…

Despite his incredibly successful Formula-1 career and his four World Championship titles he remained who he was before:  a simple guy from Heppenheim. Fanatics feel that he’s one of them, and therefore, love him unconditionally.

They love that this is not just a mask! Vettel lives indeed a very “ordinary ” life, spending his time away from racing with his family on his Swiss farm. There’s a loving family man hidden in this tough racer and he surely does his part of the job: he takes his kids to school or he does the shopping at the local supermarket. 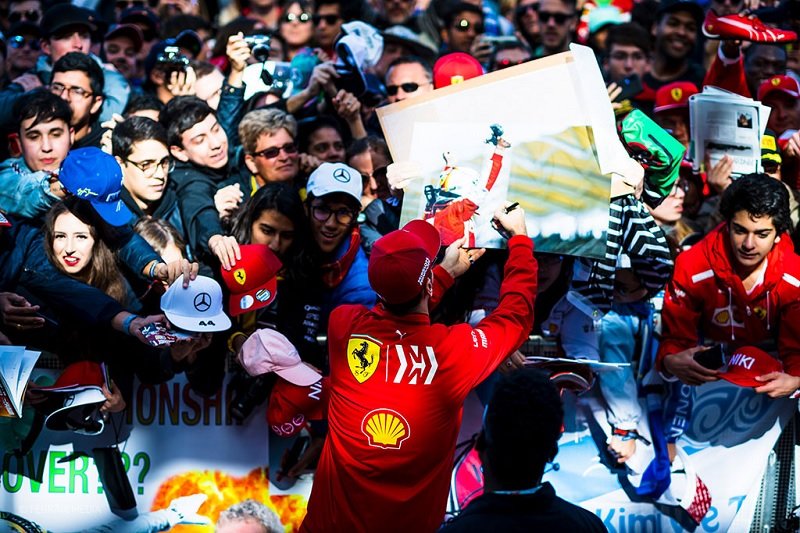 He might be “soft ” in his personal life but he’s relentless on the racetrack: he’s not fake and he’s not tippy-toeing around. He takes on the most difficult situations and usually comes out victorious. Vettel is a leader who – if he feels the support and the trust – is capable of convincing his greatest critics, too.

He’s nice and funny with children and his fans. He’s already created some precious, smiling moments with the way he handed over his cap to a small fan. Of course, before that, he carefully knocked over the Mercedes cap on his head, then replaced it with the relic he signed – much to the delight of the guys.

He’s not acting like a star. We don’t see him at fashion shows or in the company of movie stars, and he doesn’t appear on the covers of tabloid magazines. He consciously tries to avoid these situations, but not because he wants to protect the image created of him, as mentioned above. That’s just how he is, he doesn’t like to make a fuss.

However, there is another, less well-known side of this man that his critics regularly undermine – not without any reason. Those who don’t sympathize with the German racer find it difficult to tolerate the following traits…

He doesn’t follow the spirit of age. Almost every pilot shows something of his life, posts regularly on social media sites, that’s how they activate their fans, promote themselves and the racing circus. Sebastian Vettel has been a member of Formula 1 field for 13 years, but not much is known about him, not even as much as we’d know about a a new racer in F3. This level has already been surpassed even by his friend, Kimi Raikönnen who notoriously hates social media!

He’s self-righteous and a very bad loser. Professional sport fields are full of ups and downs, which means, after a great success, you have to be able to lose and to acknowledge if you are defeated. That’s a skill that Vettel completely lacks. You could say that it’s because “he’s a good racer” but when you think about it, it proves the exactly opposite of it.

It’s going to hurt but we’ll take it – He’s not ballsy enough! He came to Scuderia Ferrari as a four-time world champion, but history repeated itself in Italy as well: if he doesn’t get a teammate who lies down and serves him unconditionally, Seb won’t take up the gloves, he’ll just pack up and move on.

He’s hot-headed and the biggest mood person on the track, he’s mentally unstable: if he has a good day, you can hobnob with him, he’s sweet as a pie. But if he wakes up on the wrong side of the bed, or he’s subjected to perceived /real injustice, he’ll leave nothing standing.  As strange as it may sound, Formula-1 is a team sport, but Vettel in this regard is unfortunately a bad player.

He’s very private. We’ve mentioned Vettel’s other side, well, this is it. In the F1 paddocks he’s the most difficult to reach and the press (apart from the mandatory interviews included in the contract) regularly fights for this. Looking at him makes you feel like Formula One is for Sebastian Vettel not the other way around.

I am Vettel fun