The Turkish Grand Prix was dominated by cold, slipping and water, making the qualifying long and chaotic.

Q1 was dominated by a kind of tactical separation of the teams, many opting for temporary tires during the rai and waiting for better circumstances. Only a few decided to use the rain-specific tires and as it turned out, they took the right decision. The rain became heavier and before serious results could have been obtained, the race was interrupted. The ring was covered with water and the thought of cancelling the qualifying also came up. The Q1 continued after half an hour yet Romain Grosjean’s landing on the stones lead to the red flag. Only one fast lap remained and after the restart everything returned to normal: The two Haas, the two Williams and the spinning king Daniil Kvyat disqualified.

The Q2 was somewhat usual and while the ring started improving Verstappen showed once again why he was the king of the three free practices. Albon showed also performance and the two Red Bull cars dominated the Q2, while Lewis Hamilton, who almost disqualified during Q1 and Valtteri Bottas were really suffering. And contrary to their situations, both landed in the Q3 as well. So did the two Renault racers, Kimi Raikkönen and Antonio Giovinazzi as well! 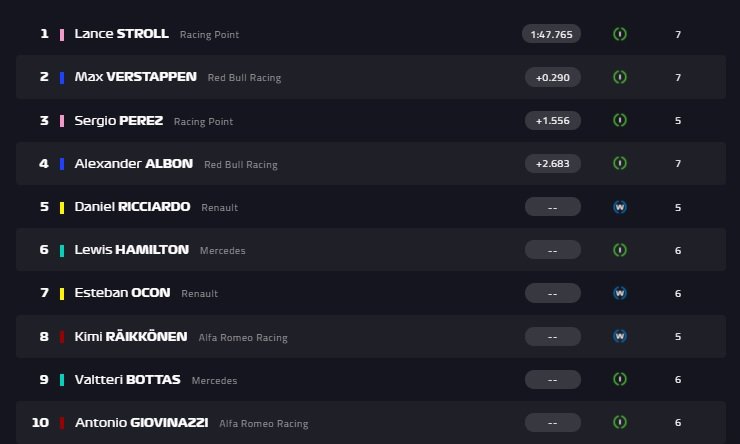 Q3 was a true surprises, a truly unexpected event occurred, something, we have not seen in the last ten years: While Verstappen continued his parade, Sergio Perez and Racing Point caught flames and crashed with one of the Red Bull cars. This was truly too brutal. The situation was made even stranger by Lance Stroll who following the battle of tires landed on the pole position.

Racing Point and Red Bull, first and second while Mercedes in front of the middle section. Who saw this coming?